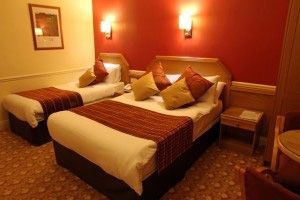 The Harcourt Hotel is very near St Stephen's Green and Grafton Street, plus it's bang on the LUAS line, handy for exploring further afield.

But for most people staying here, it's all about what happens after dark on Harcourt Street and the adjacent Camden/Wexford corridor. Welcome to the heart of Dublin's Clubland.

The Harcourt Hotel is made up of eight Georgian listed buildings (one a former home to George Bernard Shaw).

Along with traditional twin/doubles, the Hotel offers triple and quad rooms, together with family rooms that can sleep up to five. A range of suites are available at a modest supplement.

On-site food and drink options include 1900 Bar & Restaurant and the d|two bar and nightclub with its all-weather beer garden.